The margarita is a delicious cocktail that many people all over the world love and look forward to ordering when they go out for a night on the town. Some pair it with a tantalizing plate of Mexican food. But where exactly did it come from?
The origins of this tequila-infused cocktail are actually not 100 percent certain. While most people would probably say that this drink comes from Mexico, even that fact is not certain. We may never know for sure where this beloved cocktail had its beginnings. But as with most popular items with ambiguous origins, there are a number of stories that circulate. Here are 4 tales of the history of the Margarita.

Tales of The Margarita

Probably the most popular of these stories is that Carlos “Danny” Herrera is the margarita’s inventor. He is said to have created the drink at his restaurant in 1938 for an aspiring actress, Marjorie King. King was allergic to all hard liquor except for tequila. She shunned drinking straight the one spirit she could drink, so Herrera came up with an alternative. He reworked what traditionally made up a tequila shot – tequila, salt and a lime wedge – and turned it into a delicious cocktail she could enjoy, a ‘Margarita. ‘

Another story regarding the beginnings of the traditional margarita centers around Margarita Sames. She supposedly made the drink for a group of friends at her Acapulco vacation home in 1948. One of these friends, Tommy Hilton, liked the drink so much that he added it to the bar menu at his now-famous hotel chain. But while sharing a name with the cocktail may seem to give her story credit, Jose Cuervo ads seem to debunk this tale. In 1945, Jose Cuervo was already advertising this drink as being “more than a girl’s name.”

There are also other stories that purport to explain where this cocktail came from. According to cocktail historian David Wondrich, however, the most likely possibility for the margarita’s origins is that it’s simply an offshoot of another popular cocktail from Mexico at the time, the daisy. These two drinks were actually very similar. The only difference is that the daisy was made with brandy instead of tequila.

4. What About Frozen Margaritas?

As for frozen margaritas, their origin is more clear. This version is around thanks to Mariano Martinez. He began serving frozen margaritas at his Texas restaurant in 1971. Demand was so high that he had to convert an ice cream maker into a specialized machine capable of creating frozen margaritas. Not a bad treat to add to a plate of Mexican food! 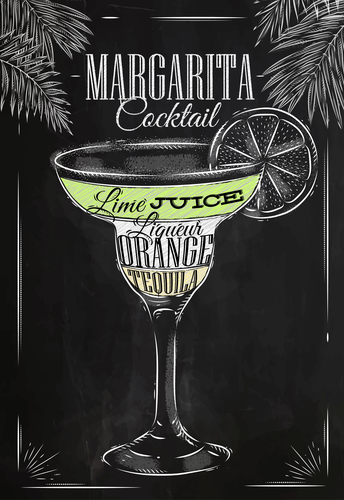 How do you make a traditional margarita? Below are the ingredients you will need.

Combine these ingredients into a mixing glass and add ice. Shake and strain before pouring into a margarita glass. Don’t forget to add salt and a lime wedge to the rim! You might even want some Mexican food to go with it.

One shot of hard liquor is generally considered to be about one ounce. Since the recipe calls for two ounces of tequila, this means that two shots of tequila are needed to make a margarita.

The margarita’s exact origins may forever remain in the territory of legends, but one thing is for certain. It is a delicious drink that leaves us with many reasons to enjoy it, inside of Mexico or otherwise!